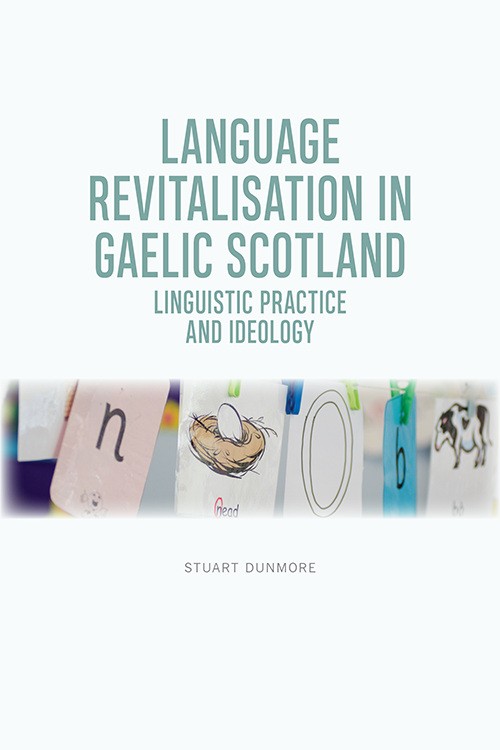 Soillse Research Associate and former doctoral student Dr Stuart Dunmore’s new book, Language Revitalisation in Gaelic Scotland has been released by Edinburgh University Press today, 8th August 2019 (https://edinburghuniversitypress.com/book-language-revitalisation-in-gaelic-scotland.html). The book builds on Dunmore’s PhD research, which examined outcomes of Gaelic-medium education (GME) in Scotland among the first individuals to come through the system in the 1980s and 1990s. GME has been offered in Scottish primary schools since 1985.

Situated within the interrelated disciplines of sociolinguistics and sociology of language, Stuart’s book explores the language use and attitudinal perceptions of a sample of 130 adults who received GME at primary school. As the first students to have received a bilingual education are now in their late 20s and 30s, this volume offers a timely examination of the long-term outcomes of the system in its earliest years, and of the future prospects for Gaelic language maintenance and revitalisation in Scotland.

The book presents in-depth discussion and analysis of narratives in order to demonstrate former Gaelic-medium students’ present-day relationships to the languages they speak, offering fascinating insights into the possible reasons – historical, ideological and personal – for these relationships. This book presents the first open assessment of the outcomes of Gaelic-medium education in Scotland, and offers suggestions for individuals and policymakers seeking to revitalise languages internationally.

“With Scottish Gaelic in decline for almost a millennium, Dunmore’s book fills a crucial gap in our understanding of the long-term social and linguistic outcomes of Gaelic medium education. It will inform policy makers and activists in Scotland and worldwide, where revitalization efforts are underway to create new speakers and domains through schooling.”

Dunmore’s study reports at a time when the fortunes of Gaelic are challenged by formidable social, economic and political changes in wider society. The recently improving provisions of infrastructure, cultural support, and new opportunities for the language come at a very late stage in its history, and had they been implemented much earlier, they might, in all fairness, have given the language and its speakers a much firmer base on which to maintain its culture and place in what I have called ‘runaway language-shift’. This will call for its own study of external forces. What Stuart Dunmore has provided here, however, is the corresponding, penetrating and long called-for study of the internal motivations and attitudes of the new ex-GME generation, in which, importantly, we hear the actual voice of that generation itself. I am delighted to commend this study as an essential read for all those interested in the future prospects of Gaelic in Scotland, and to language planners and policymakers in particular.